Suryakumar Yadav hit 4 sixes in one over, equaled the record of these legends 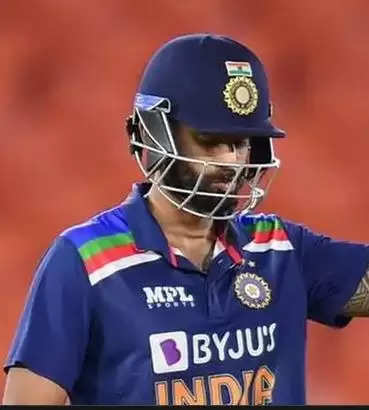 Suryakumar Yadav batted tremendously against Hong Kong on Wednesday (August 31). He scored an unbeaten 68 off 26 balls in the Asia Cup 2022 match in Dubai. His scintillating innings included six fours and as many sixes.
Four of these six sixes came in the last over of the innings. Yadav hit 26 runs in the 20th over and hit three consecutive sixes in the first three balls.

The fourth six in the over came on the fifth ball, which he hit over the fine leg boundary. Suryakumar and Virat Kohli, who were 'Player of the Match', played an unbeaten partnership of 98 runs for the third wicket.

Suryakumar was batting on 42 runs. In the last over, he hit 4 lofty sixes in five balls on Haroon Arshad.

In the 20th over, India added 26 runs on the strength of Suryakumar's batting. Videos of Suryakumar Yadav's sixes are becoming fiercely viral on social media and fans are also very fond of him.

With his half-century in 22 balls, Suryakumar Yadav has joined the list of players to score the fastest fifty by Indians in T20 International cricket.

All-rounder Yuvraj Singh is at the forefront of this list. This is followed by KL Rahul and Gautam Gambhir. Suryakumar is tied with Rohit Sharma in the list of most T20 International runs scored by an Indian in an over.

Let us tell you that batting first, India got off to a good start. Rohit Sharma and KL Rahul scored 38 runs in the first five overs for the Hong Kong bowlers. However, KL Rahul (36) and captain Rohit Sharma (21) could not play big innings. Rahul, returning from injury, was expected to score well, but he took 39 balls for 36 runs. He hit two sixes out of which one was on a free hit.

Like Deepak Chahar, Hong Kong's millionaire cricketer proposed to girlfriend in the stadium, know what was the answer?
Captain Rohit was also dismissed in 13 balls with two fours and a six, he was dismissed by Ayush Shukla. Rohit also completed 12,000 runs as an opener in international cricket during this period. In an attempt to sweep the delivery of Mohammad Ghazanfar, Rahul was caught by the wicketkeeper. The team had lost both of these wickets in 13 overs, making the score 94 for two. Then Kohli and Suryakumar came to the crease and shared an unbeaten 98 runs in just 42 balls.

This is India's second consecutive win, having defeated Pakistan by five wickets in the opening match of the tournament. Afghanistan has reached the Super Four from Group B.