Ryan Burl: Burl made 2 hits with the bat, knocking Australia to the mat 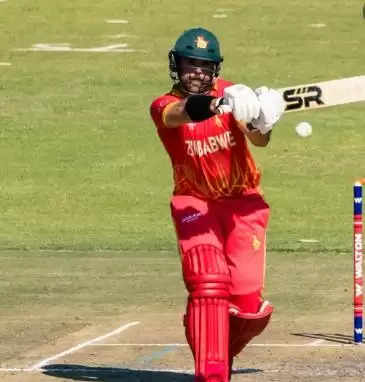 Zimbabwe created history on Saturday and defeated a strong team like Australia by 3 wickets. In the third one-dayer of the series played in Townsville, all-rounder Ryan Burl showed great performance and took 5 wickets for just 10 runs in 3 overs.

Thanks to his brilliant bowling, the Australian team was all out by scoring 141 runs in 31 overs. After this, Zimbabwe achieved the target in 39 overs. Although he lost 7 of his wickets. Australian pacer Josh Hazlewood took 3 wickets.

David Warner missed the century
Talking about the match, despite David Warner's innings of 94 runs, Australia could not even touch the score of 150. Warner hit 14 fours and 2 sixes in his innings of 96 balls.

Apart from him, Glenn Maxwell (19) was the only one who could touch the figure of ten. Captain Regis Chakabwa scored 37 runs for Zimbabwe and returned unbeaten. He played 72 balls and hit 3 fours.

Burl hit the ball twice
Even though 28-year-old Ryan Burl showed a great performance with the ball against Australia, he has not once but 2-2 times with the bat. Burl has targeted the Bangladesh bowlers on both occasions.

It can also be said that he has the most fun in cheating Bangladeshi bowlers. He is also the batsman who scored the most runs in an over of a T20 match for Zimbabwe.

34 runs scored in the over
Burl scored 34 runs in the third T20 match of the series played against Bangladesh in Harare this year in the over of left arm spinner Nasum Ahmed. He hit 5 sixes and one four in the over.

Zimbabwe won this match by 10 runs. Byrne was selected as the man of the match who played a valuable innings of 54 runs off 28 balls with the help of 2 fours and 6 sixes.

Shakib has also been targeted
In 2019 against Bangladesh in Mirpur too, Ryan Burl created a sensation with the bat and scored 30 runs in Shakib Al Hasan's over. Burl hit 3 sixes and as many fours during this time.

He also spoiled the economy rate of Shakib, the all-rounder who is captaining the team. Shakib scored 49 runs in 4 overs in that match. However, Bangladesh won this match by 3 wickets.