The groom had reached the pavilion after thinking something else, as soon as he got a chance, he made his sister-in-law a bride - watch video 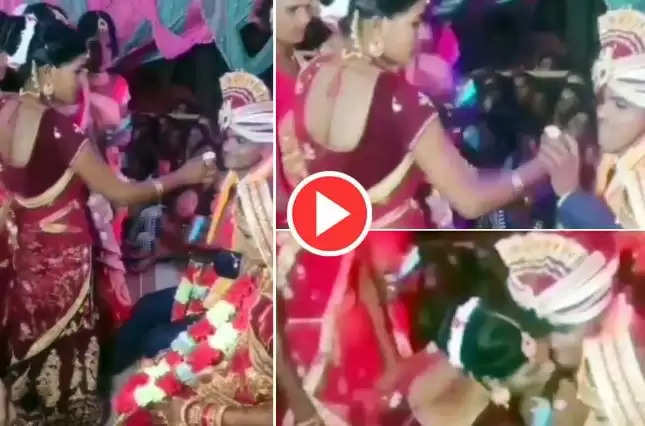 Newz Fast, New Delhi: It can be seen in this video that the groom has gone to get married but something else is going on in his mind.

As soon as he got it, he put the bride in shock. There is a lot of fun in Indian weddings. Months in advance, preparations start in the wedding house.
There is a different level of atmosphere in the house. Apart from the bride and groom, on the wedding day, a different swag of their relatives is also seen.

But now the video that has surfaced
Anyone will be shocked to see the scandal that the groom has done in it. In this video related to marriage, you can see that the bride and groom are ready for Jaimala, but something else would have been going on in the groom's mind here. Soon he did the game.

Tthe groom played
In this video going viral, people can see that the groom reaches the bride's house with a procession. Now it's time to perform the ritual of Jaimala. Both reach the pavilion with their respective relatives.

The bride goes ahead and gives the groom a jaimala. Now it is the groom's turn and as soon as he moves forward, his eyes fall on the sister-in-law. He randomly put a garland around her neck and danced with joy.

The bride did not believe
The way the groom got married in front of the bride wearing a garland to her sister, the bride was shocked to see her. This video has been uploaded on Instagram account named its.chiku_.

However, looking at the video, it can be clearly understood that this is just a prank video and it has nothing to do with reality. The video has got millions of views so far.