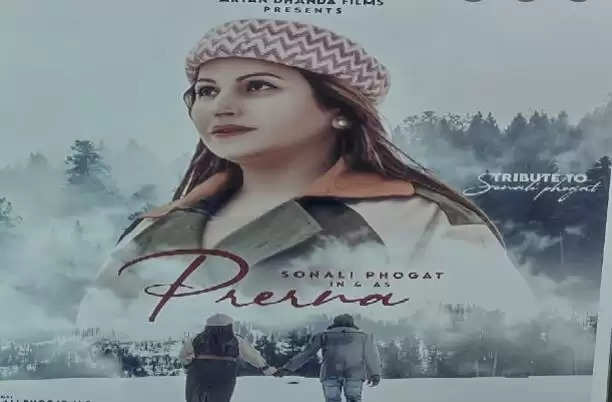 Newz Fast, New Delhi: The name of this last film of Sonali Phogat is Prerna. The film's director Naresh Dhanda, who plays Phogat's father-in-law in the film, said that it is a motivational film.

After the death of BJP leader and actress Sonali Phogat, her last film is going to be released soon. The makers gave this information.
The name of this last film of Sonali Phogat is Prerna. The film's director Naresh Dhanda, who plays Phogat's father-in-law in the film, said that it is a motivational film.

Talking to news agency ANI, he said, 'The title of the film is Prerna. Sonali Phogat has played the lead role in this film. It is actually a motivational film. It shows how Sonali Phogat's character Prerna tells students not to lose their courage and hope in life. Always keep moving forward.

Phogat (43) died hours after reaching Goa in late August. The death under suspicious circumstances is being investigated. Sonali Phogat's daughter Yashodhara released the poster of the film two days ago.
The director had also said that he wanted to shoot a song with the daughter of the late actress. The release date will be announced soon.

The director said, "The film is ready but I want to shoot a song with Yashodhara, which people can see at the end of the film as a tribute to Sonali Phogat. I want to pay tribute to her through this song." He also said that he also plans to make a biography on Sonali Phogat.

He said, 'I would like to say that his life has been like a film. The way she came from a village and then later traveled to Bigg Boss, TV and films is fantastic. He faced many challenges.
Her husband also died under suspicious circumstances. He also said that as soon as the culprits are known, he will start work on the biography.