Ganpati Bappa went to Bollywood Khan's house, Sahrukh said the younger son did with me.. 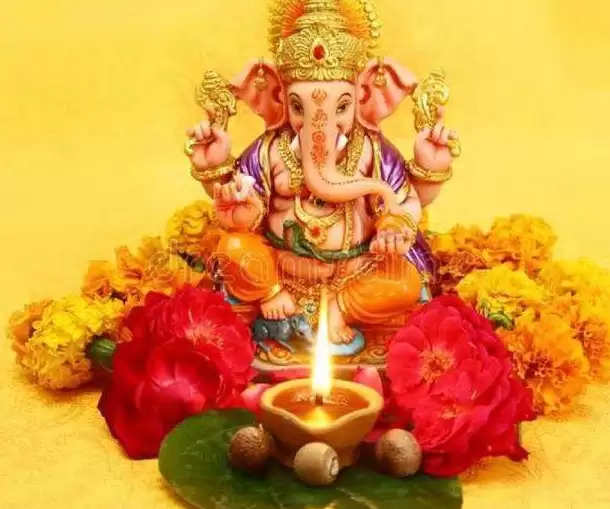 Newz Fast, New Delhi: On Ganpati Chaturthi, Shah Rukh Khan has shared the post of Gajanan's younger son AbRam Khan welcoming him on his social media account. But in the post, only a little part of the back of the head of both is showing.

Shahrukh Khan, who is known as the Khan of Bollywood actor and Bollywood industry, has shared a picture from his official social account on Ganesh Chaturthi. While sharing the picture, he has written down that Ganpati Bappa is also sitting at his house.

Shahrukh Khan has told in his social media post that Gajanan has been welcomed by him along with his younger son AbRam Khan. But in this post, he and his son Abram Khan are not completely visible, while the idol of Ganesh ji is clearly visible.

What is written by Shahrukh Khan in the photo
Shahrukh Khan has shared a picture on social media on Ganesh Chaturthi. In this picture, the idol of Ganesh ji is seen, which has been decorated a lot and fruits and flowers etc. have also been kept in front. That's where this picture has been clicked.

Due to which some part of the head of Shahrukh Khan and Abram Khan is also visible. Although in this photo only a very small part of his head is showing, only the hair of the head. Due to being shared with SRK's official account, the picture has been well-liked by social media users.

Have faith in God!
Sharing the photo, Shahrukh Khan wrote in the caption, 'Ganpati ji was welcomed at home by me and the younger. After that we ate modaks, which were quite tasty. You can fulfill all your dreams... Learning, working hard, having faith in God. Wishing you all a very Happy Ganesh Chaturthi. Users are commenting fiercely below SRK's post.

Shahrukh Khan's projects, also happening boycott
Shahrukh Khan is making a comeback with the film Pathan. Pathan will release in January 2023. John Abraham and Deepika Padukone will also be seen in the lead roles in the film. Apart from this, Shahrukh Khan has recently made an official announcement of the film Dunki with Rajkumar Hirani.

Shahrukh Khan's pair is made with Taapsee Pannu in the film. The film will hit the theaters on 22 December 2023. But before the knock, the social media platform has started being boycotted like Aamir Khan's film Lal Singh Chaddha.