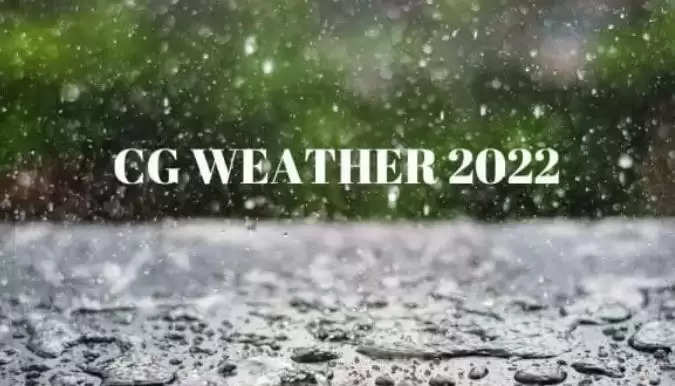 Newz Fast, New Delhi: It is raining in some areas. Due to this the temperature is increasing and the humidity is increasing.

There has been a break in the rain these days. However, some areas are receiving scattered rainfall. Due to this the temperature is increasing and the humidity is increasing. Raipur remained the hottest on Wednesday with a temperature of 34.6 degree Celsius across the state.

The minimum temperature here was also recorded at 26.5 degrees Celsius, which is two degrees Celsius above normal. The Meteorological Department says that due to the effect of low pressure over the Bay of Bengal, light to moderate rain is expected in different areas of the state on Thursday.

The weather across the state including Raipur remained normal since Wednesday morning. In the afternoon there was a slight change in the weather in Raipur and many areas received heavy rainfall. Due to this, the temperature increased further.

Along with this, 4 cm in Pali, 3 cm in Balrampur, 2 cm in Manora-Jagdalpur-Kota. These days the humidity has also started increasing due to the brakes on the rain and the block rain.

It is being told that the departure of monsoon is also possible from the third week of September and in the last days of September, the monsoon will be completely gone. The weather pattern is likely to remain like this in the coming days.

Light to moderate rain may occur in different areas of the state
Meteorologist HP Chandra said that an upper air cyclonic cyclonic circulation is extending up to a height of 5.8 km over east-central Bay of Bengal and adjoining southeast Bay of Bengal.

Under its influence, a low pressure area is likely to form over West Central Bay of Bengal. Due to this, light to moderate rain may occur in different areas of the state on Thursday.