A 102-year-old old man who arrived with a band instrument to give the certificate of survival, said - Thara Fufa is still alive. 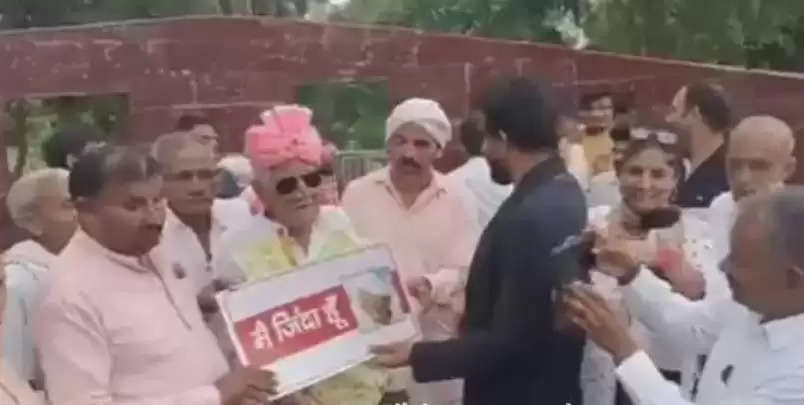 Newz Fast, New Delhi: Here ADC Mahendrapal assured them of appropriate action. On Thursday, elderly Dulichand reached the ADC office on a chariot to protest against the deduction of his pension.

In Haryana's Rohtak, 102-year-old Dulichand, aggrieved by the cut of his pension, arrived on Thursday with a band instrument to prove his survival.
The elderly pensioner riding on a chariot wearing a turban, carrying a farsa in his hand, was also joined by people swaying to the tune of the band. The elderly along with former state president of Aam Aadmi Party Naveen Jaihind reached the additional deputy commissioner office from Mansarovar Park.

Here ADC Mahendrapal assured them of appropriate action. On Thursday, elderly Dulichand reached the ADC office on a chariot to protest against the deduction of his pension.

Before this, people of the society united under the leadership of Navneen Jaihind in Mansarovar Park. Everyone here condemned the cutting of pension of the elderly and appealed to start it again immediately.

After meeting here, everyone left for the ADC office, dancing and singing to the tune of the band in front of the chariot. During this time, the old man was also holding a plaque written in his hand in relation to himself being alive.

After reaching the ADC office, the elder handed over the memorandum to the ADC and former minister Manish Grover. Not only this, the Aadhaar card, PAN card, family ID and bank statement of the elderly were also shown to the administration and the former minister.

He also questioned him about the government not having Rs. He said that the elderly should get their pension. This is their right. Many people were present on this occasion.